It’s been over three years since I managed and deployed a Skype for Business/Lync system, and at my new job I was hired on as a be a network engineer, but I noted in a past life I received a MCSE in Skype for Business, so I could definitely be the backup for the primary SME (subject matter expert) in SfB. However, in a strange twist, the primary SME left — and you know what, there’s just not a lot of Skype for Business/Lync engineers out there, especially in a small labor market, so I stepped up to help the organization because I was the most qualified by a long-shot.

So I’m back doing some Skype for Business again.

I actually have always liked voice routing, so it’s fun to be doing some of this stuff again (although SfB is a pretty intense, integrative technology, so it’s not all Pop-Tarts and unicorns).

However, I was trying to get reacquainted with some commands for cleanly shutting down a Skype For Business server, and I just didn’t find a lot of good information out there, so I thought I might write something up “real quick”. This is somewhat basic info for SfB enterprise deployments, but it might be helpful.

Enough of the pretext, let’s get to the first command…

I’m starting with this command because it’s the most basic command you should already know, but plays a role for later in this post. Typically you’ll use the command to see how many connections are being used by a service, if a service is running, etc.

The command is straightforward: Get all or one of the SfB (or Communication Server, which is where the acronym CS comes from) Windows Services on the machine.

The command `Stop-CSWindowsService` is the most basic command you’ll use to stop all or one of the services on a SfB server. The command will execute stopping of services in the proper order of stopping SfB services, including any dependent services.

Typically you’ll be using this command on a ‘Standard’ deployment SfB server, or any non-front end server in an ‘Enterprise’ deployment such as mediation/edge servers (more info: standard vs enterprise deployment). However, there are probably rare situations in which you’ll stop just one service, so you’ll likely be stopping all of them.

If you’re doing this outside a maintenance window for some reason, I prefer to do the following: Stop-CSWindowsService -Graceful. The -Graceful is important here, because what it does is it puts the services into a paused state, preventing any new connections from happening and waiting on existing connections to disconnect. On mediation servers, whenever I’ve need to stop a server in a mediation pool, this is my preferred method so that I wait for the calls to end. However, it won’t stop until the call is done, so you might be waiting awhile.

For whatever reason, this command scared me at first, largely because of my ignorance of what it does. The official documentation on the command I don’t think does it justice, so here’s my attempt at it.

The command `Invoke-CSComputerFailover` will basically perform a Stop-CSWindowsService -Graceful operation, but it acts slightly different. The differences:

After working with it and using it several times, it’s not as scary as I thought. Just run it on one machine at a time lest you have some Windows Fabric issue due to quorum loss (or something to that effect).

Sometimes when you’re failing over a front end server, you get stuck waiting for some services to stop like this: 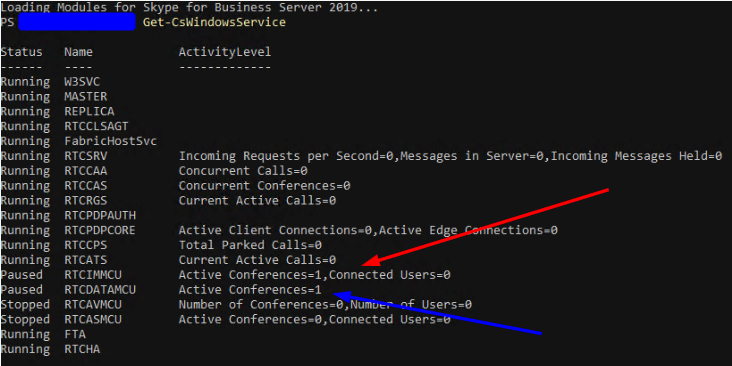 If you note the red and blue arrows, the services are left open, likely from a conference that has ended already, but is being left open for whatever reason. To speed up Invoke-CSComputerFailover, just open a separate elevated terminal and stop the services like this: 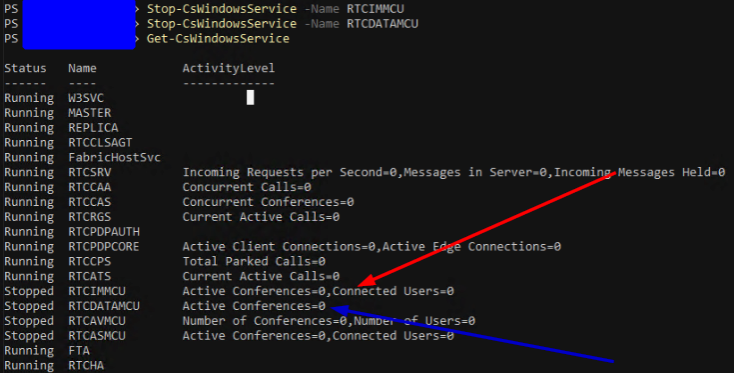 After which, `Invoke-CSComputerFailover` will continue on as expected.

I originally tried out the idea on my own, but the following blog entry also helped me and explains it from a different perspective.